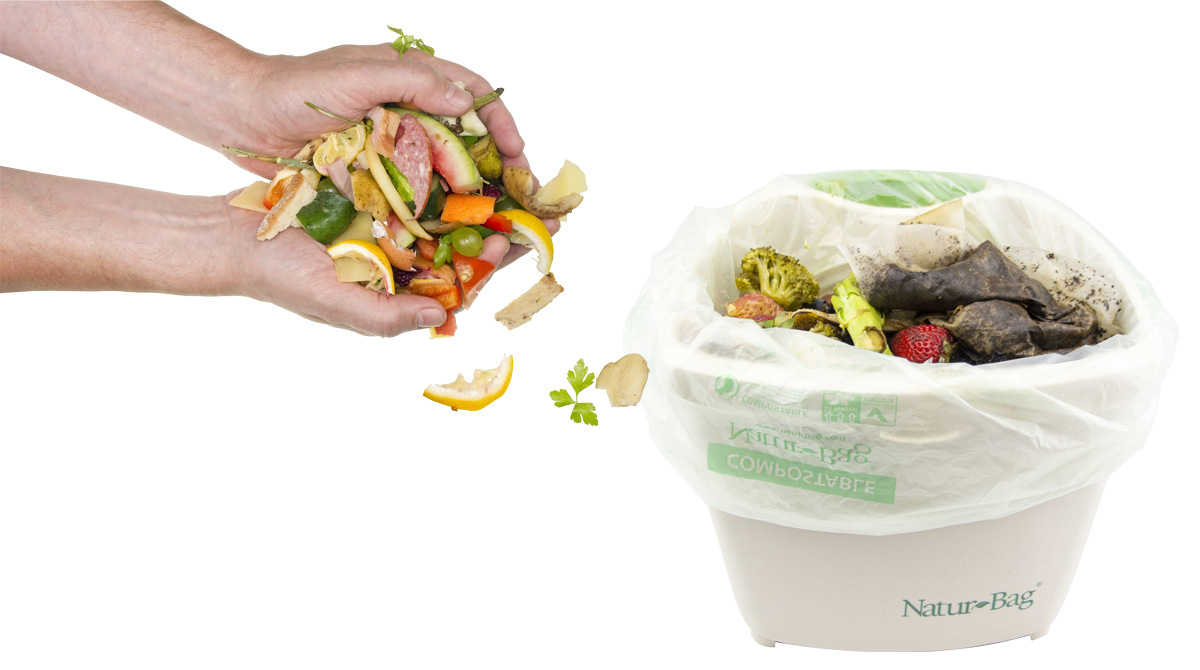 The Great Lakes Bay Invitational, a new professional golf event on the LPGA circuit took place July 15-20, 2019 at the Midland Country Club in Midland, Michigan. The event hosted over 32,000 guests over five days.  View the case study to learn about the zero-waste plan, and the event’s success!

An independent Minnesota school district, made up of 31 schools, with 28,000 students and 3,500 staff has all of their food service facilities participate in an organic waste collection program. The school began the composting program in 2003 as an initiative to reduce solid waste hauling costs. Originally, food scraps and other organic materials were collected directly into unlined containers in the cafeterias which were then co-collected with bagged non-organic trash. When collected and hauled, the trash bags in the truck often ripped open and contaminated the organic waste. The unlined cans in the school also posed a sanitary issue since they needed to be cleaned frequently to avoid odors.

To resolve the problem of contaminated compost and soiled collection bins, the school district chose Natur-Bag® compostable trash bags. Under the revised composting program, all organic waste is separated into collection bins lined with Natur-Bag® compostable can liners. Then the bags containing the organic waste are collected by a local commercial compost facility, who sells the resulting compost material to local landscapers. Often the compost returns full-circle since it is used for school district land projects.

By using the Natur-Bag® compostable bags, the school district has been able to simplify and improve the efficiency of their organic waste diversion program, as well as eliminate the contamination of the final compost material. The program has reduced district garbage tipping fees by nearly 25 percent. It has also drastically cut their overall waste contribution to landfills. The program has been an effective way for administration, educators, and students to learn the environmental and economic benefits of composting, as well as raise awareness of their own individual carbon footprint.

Since opening in 2009, Lake Chalet has focused on reducing the amount of waste sent to the landfills by implementing a recycling and organic waste diversion program. A challenge Lake Chalet faced during this initiative was determining how to set up an effective and sanitary system for collecting and sending food scraps to a compost facility. They needed a strong and robust compostable bag that contained odors and maintained a clean kitchen environment.

Lake Chalet evaluated various compostable bag options to find a bag that met these requirements. The bags were tested through an unconventional method they call “The Fish Test.” This unique test was performed by filling a bag with fish scraps and swinging the bag around in order to measure the bag’s strength. If there was no mess, the bag passed. Natur-Bag® compostable bags passed “The Fish Test” with flying colors and—perhaps more importantly—without flying fish. As a result of Natur-Bag®’s proven durability, Lake Chalet chose Natur-Bag® to handle food scraps.

By using Natur-Bag® products to collect organic waste, Lake Chalet saved time and money. They have been able to keep collection bins clean and odor-free, and now that more than half of Lake Chalet’s waste is sent to a compost facility instead of a landfill.

What Natur-Bag Can Do For You

Engineered strong to handle the toughest organic waste collection job, Natur-Bag® compostable bags are important tools in organic waste diversion initiatives. Our bags and liners help contain odors and leaks, eliminating the need to wash and dry collection bins. In addition to strength, we made it easy for waste haulers to identify Natur-Bag products as compostable. Every Natur-Bag® is green in color and is printed with the BPI Compostable logo, certifying that they meet the ASTM D6400 standard specification for compostable plastics. To learn more about Natur-Bag® products and how they can help your organic waste diversion initiatives, contact us at info@naturbag.com.

“Natur-Bag® products make collecting food scraps easy and sanitary in our busy kitchen. It is important that the bags can handle our heavy food waste without breaking. As a result of our successful organics collection program, we are able to send our food scraps to become useful compost and reduce our solid waste tipping fees.”

Thousands of products labeled with terms such as “biodegradable”, “biobased,” and “compostable,” are being developed for a variety of applications.

The technical blog is an effort to clarify some of the definitions and misconceptions about biodegradable vs. oxo-degradable products.

What does “Biodegradable” mean?

Biodegradability is an end-of-life option that allows one to harness the power of microorganisms present in the selected disposal environment to completely remove biodegradable plastic products from the environmental compartment in a timely, safe, and efficacious manner.

The US Composting Council in sponsorship from the California Organics Recycling Council recently put together a guide called “Compostable 101” which is an overview of compostable plastics and products in the market today.

These are made by incorporation of specific additives into traditional plastics such as Polyethylene (PE), Polypropylene (PP), Polystyrene (PS), Polyethylene Terephtalate (PET) and sometimes also Polyvinylchloride (PVC) at the moment of conversion into final products. The additives are based on chemical catalysts, containing transition met­als such as cobalt, manganese, iron, etc., which cause fragmentation as a result of a chemical oxidation of the plastics’ polymer chains triggered by UV irradiation or heat exposure. In a second phase, the resulting fragments are “claimed” to eventually undergo biodegradation. European Bioplastics has a strong position paper summarizing the ills of oxo-degradables and as an industry distanced itself from such products claiming degradability for benefit of the environment.

The true story of Oxo-Degradation

Designing products to be degradable or partially biodegradable causes irreparable harm to the environment. Degraded products may be invisible to the naked eye. However, out of sight does not make the problem go away. One must ensure complete biodegradability in a

short defined time frame (determined by the disposal infrastructure). Typical time frames would be up to one growing season or one year. The disposal environments are composting, anaerobic digestion, marine/ocean, and soil.

Unfortunately, oxo-degradable products in the market fragment into smaller pieces and may even degrade to residues invisible to the naked eye. However, there is no data presented to document complete biodegradability within the one growing season/one year time period. It is assumed that the breakdown products will eventually biodegrade. In the meanwhile, these degraded, hydrophobic, high surface area plastic residues migrate into the water table and other compartments of the ecosystem causing irreparable harm to the environment.

In a Science article researchers report that plastic debris around the globe can erode (degrade) away and end up as microscopic granular or fiber-like fragments, and that these fragments have been steadily accumulating in the oceans. Their experiments show that marine animals consume microscopic bits of plastic, as seen in the digestive tract of an amphipod. The Algalita Marine Research Foundation report that degraded plastic residues can attract and hold hydrophobic elements like PCB and DDT up to one million times background levels. The PCB’s and DDT’s are at background levels in soil, and diluted out so as to not pose significant risk. However, degradable plastic residues

Japanese researchers confirmed these findings. They reported that PCBs, DDE, and nonylphenols (NP) were detected in high concentrations in degraded polypropylene (PP) resin pellets collected from four Japanese coasts. The paper documents that plastic residues function as a transport medium for toxic chemicals in the marine environment.

Therefore, designing hydrophobic polyolefin plastics, like polyethylene (PE) to be degradable, without ensuring that the degraded fragments are completely assimilated by the microbial populations in the disposal infrastructure in a very short time period poses more harm to the environment than if it was not made degradable.

In an effort to reduce the claims that are made in the market about environmentally benign degradation of products, the U.S. Federal Trade Commission in 2012 revised its Green Guide and advised companies “that unqualified biodegradable claims are acceptable only if they have scientific evidence that their product will completely decompose within a reasonably short period of time under customary methods of disposal.” (short summary of revisions). Since the revision the FTC has cracked down on several misleading claims related to degradability of a product in landfill or those taking several 100 years to biodegrade!

Vermont Coffee Company recently opened a café on site. Once the café opened they were faced with a challenge of what to do with the 50 pounds of coffee grounds that they generated on a weekly basis. As coffee grounds tend to be hot, wet and heavy, finding the right compostable liner is essential for a successful program. 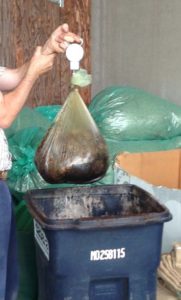 Vermont Coffee Company worked with their local waste management company to arrange the composting solution. The final hurdle they had was how to transfer the grounds from the café to the repository on the other side of the building. The café uses a 10-gallon Rubbermaid bucket for its daily use, but emptying and cleaning the buckets each day became resource (water, detergent) and labor intensive. The solution was to use a compostable liner in the collection buckets. After evaluating several options, they decided to try the Natur-Bag® 13-gallon compostable liners.

Natur-Bag® liners have held up well to both hot and cold disposal of coffee grounds. They have also allowed Vermont Coffee Company to streamline their disposal process saving them both time and money. Natur-Bag® has provided a simple, clean, and environmentally sound solution.

“The liners have held up well to both hot and cold disposal of coffee grounds. They have also allowed Vermont Coffee Company to streamline their disposal process saving them both time and money. The Natur-Bag® product has provided them a simple, clean, and environmentally sound solution”

We’re experts when it comes to bioplastics and sustainability! Connect with us today – together we can create a sustainable future.